This project has a specific target of providing a low-cost, open source technological kit to allow scientists, academics, hackers, makers or OSHW fans to hack their way to ultrasound imaging - below 500$ - at home, with no specific equipment required.

The aim of this project is to build a small ultrasound imaging hardware and software development kit, with the specific goal of:

Previous project has shown the feasibility of the hardware, but was not simple enough. Let's keep the momentum, and use this dev kit in other projects as well - such as dopplers or non-destructive testing, different projects using piezos as sensors.

Ultrasound imaging has evolved since the first ultrasound machine appeared. The first devices were using single-sensor (transducers) techniques, coupled with mechanical scanning - hence allowing a single signal processing channel. The architecture of such systems, as shown below, is well-known and formed the basis of ultrasound imaging.

A modular approach was chosen to ensure that each key component inside the ultrasound image processing can easily be replaced and compared with another module. Each electronic module takes the place of a function in the signal processing chain or allows tapping into the different signals circulating between the blocks.

Previous experiments have been done, to get images using different digital acquisition systems, such as a bitscope, a STM32, or a high-speed ADC for beaglebone. The Raspberry Pi was retained in the end for its ease of use, its price, and community working on it - increasing the potential reach of the project.

For the transducer, one can use either a ATL mechanical probe for example, or a piezo + servo setup, to mechanically scan the medium to be imaged

Quickstart of the Pulser module

The assembly is detailed below: 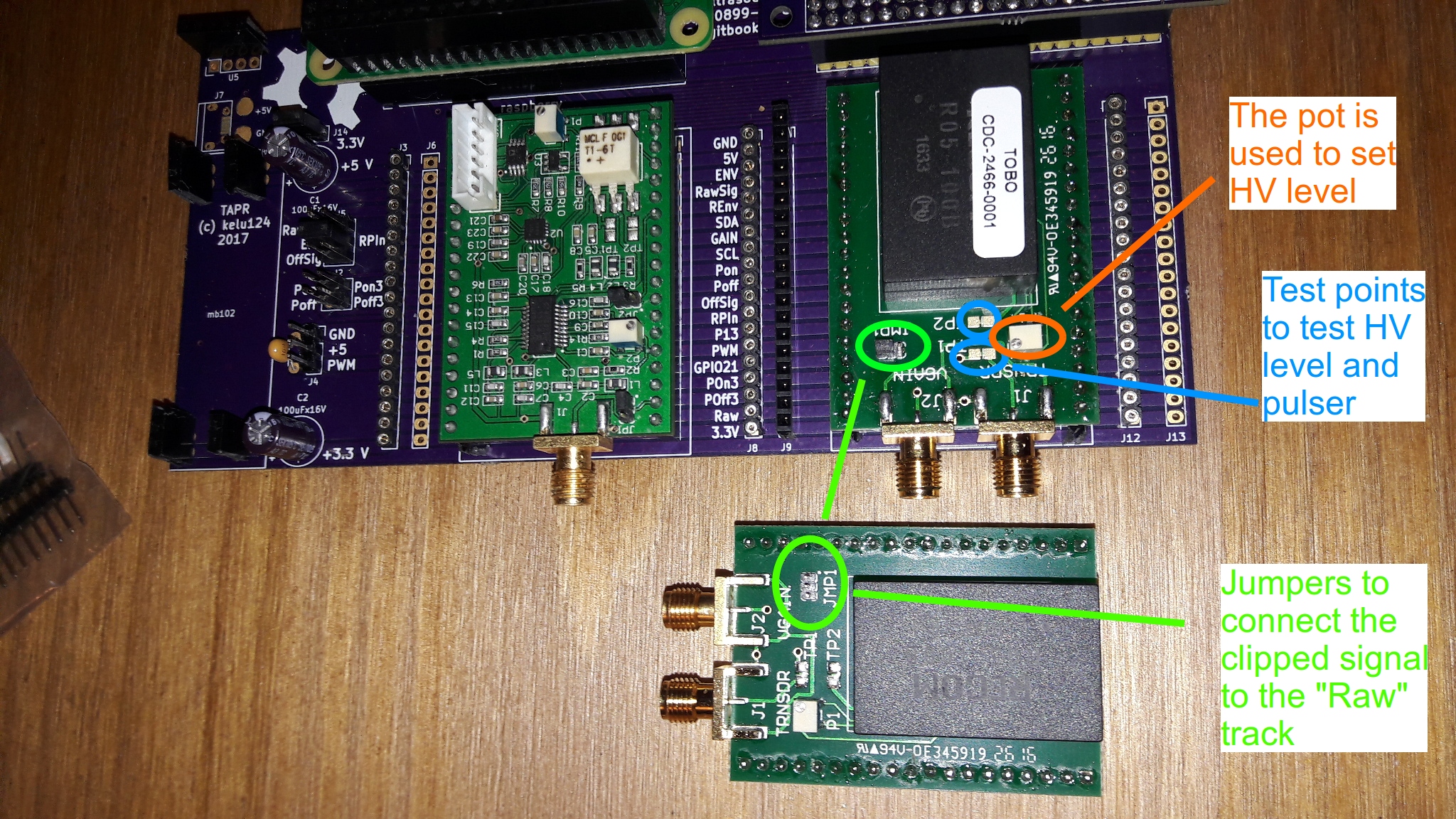 Read more on the dedicated page.

The pulser is controled by a double signal, one, PulseOn, to start the pulse, and the other, PulseOff, to bring the pulse back to 0.

Note: The setup presented here was with the Raspberry Pi + ADC setup. Raspberry Pi kernel modules and software can be found following the previous link.

The PulseOn, PulseOff and signal output are represented below.

Yellow is PulseOn, Blue is PulseOff. The logic is also 3.3V and 5V tolerant. Here, the control signals were produced with a raspberry pi.

For the sake of testing, keep PulseOn as long as your pulse needs to be, but keep PulseOff (or "Damper") on for something around 5 - 10 us. You can test for example with the simple code here, inspired from the retired pulse control OneEye. 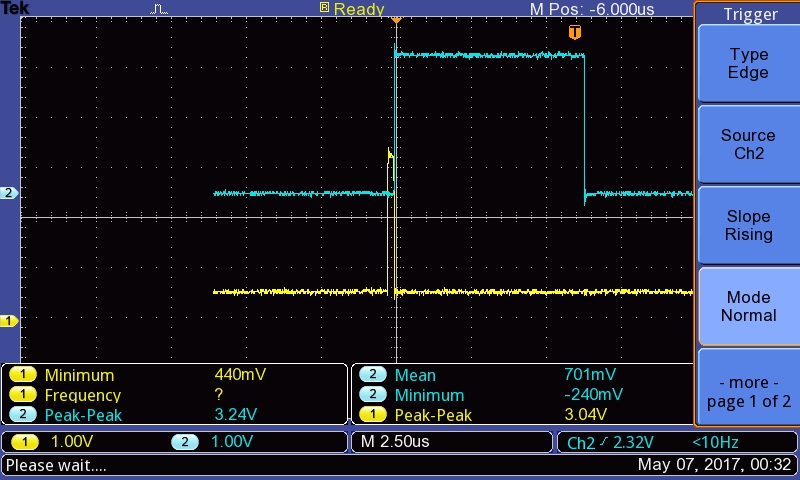 Output on the pulser SMA to transducer 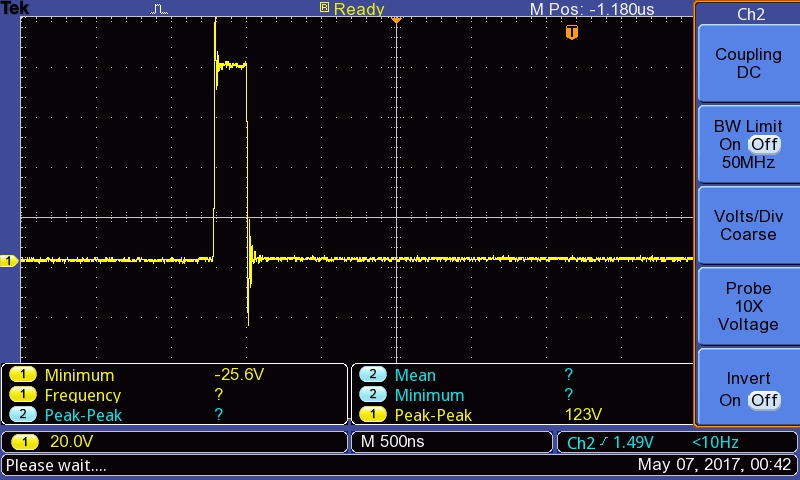 Quickstart of the mother board

As a piece of advice, don't solder your modules directly on the motherboard... unless you're sure that they are properly set up, that there's no short, ... and keep the design as modular as possible.

Instead, solder header, 19 slot long, for each side of the modules. These will be the host for the pins coming from the different modules.

Nothing can keep you from soldering round slot headers for ease of using wire jumpers.

Don't forget to put some capacitance on the dedicated slots on the motherboard to smooth the supply - and on Doj v2, to include the 3.3V jumper (above the 5V capa) so that the Pi can provide the necessary 3.3V to the board, and, if using a Pi, to solder the Pon <-> Pon3 and Poff <-> Poff3 if you want to use a pulser at 3.3V from the Pi.

How to solder the PCB ? 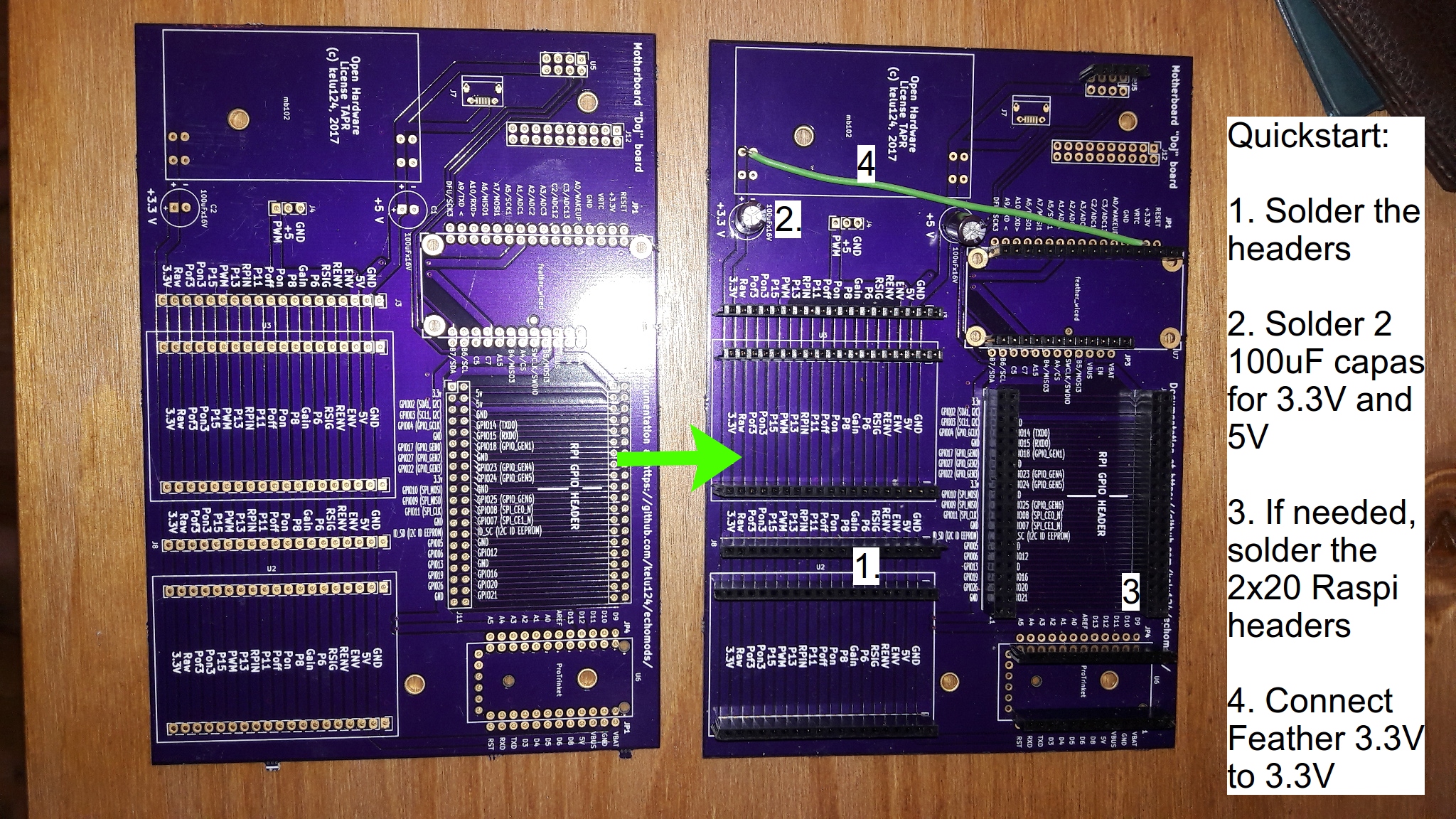 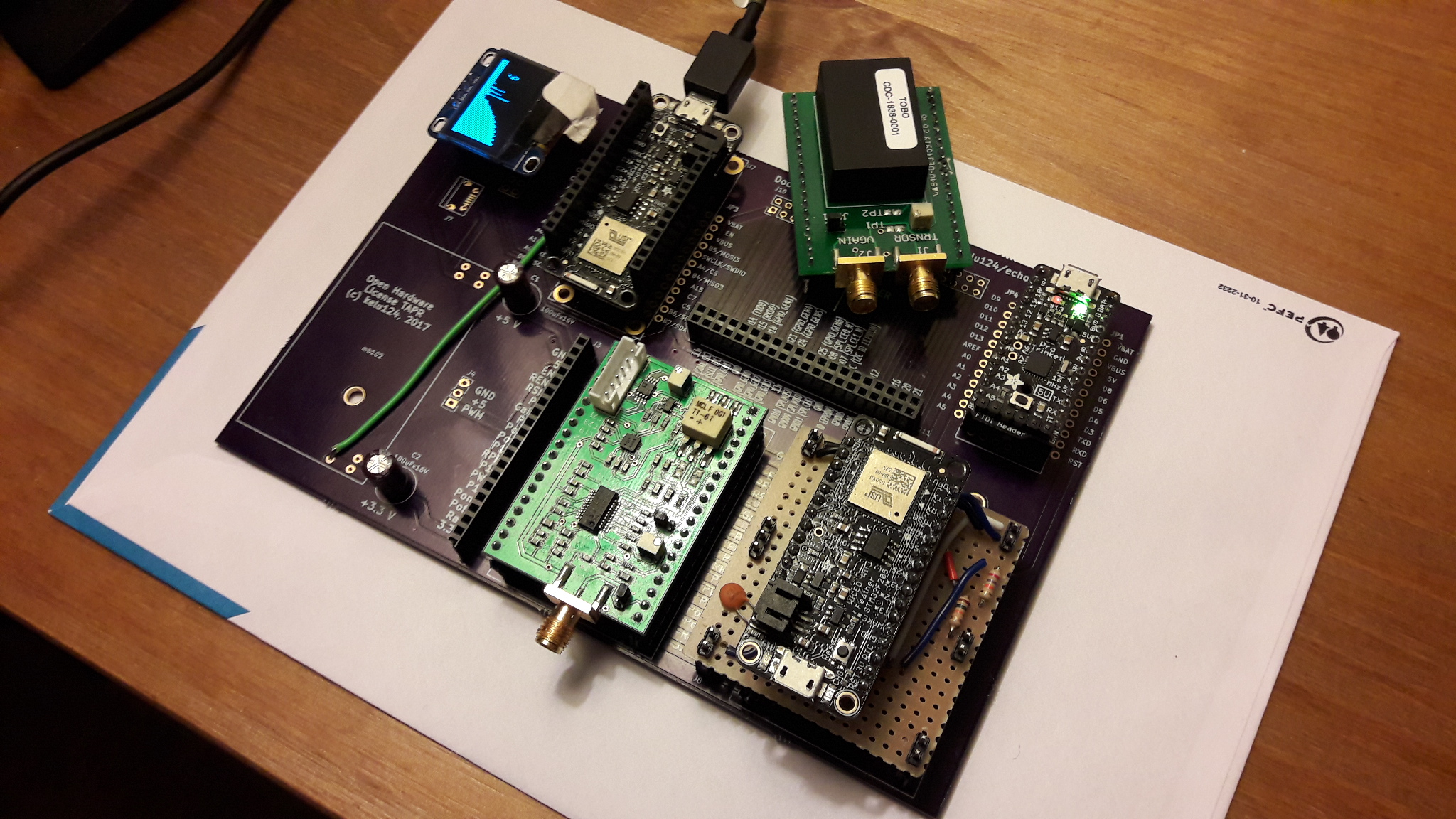 The PCB can be ordered on OSHPark - or ask me if I have one available.

How to solder the PCB ? 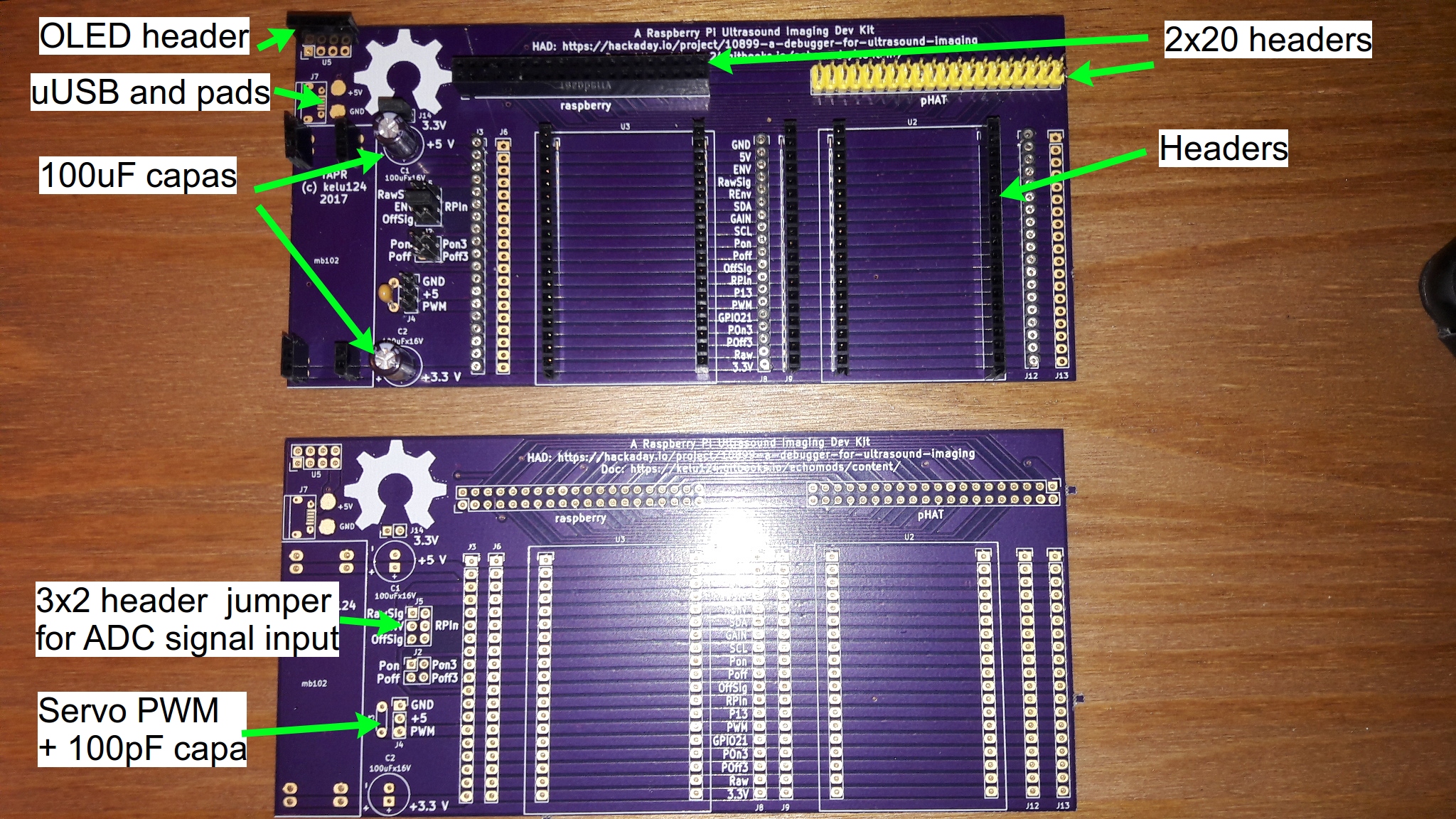 Example of Doj v2 powered through the Feather module 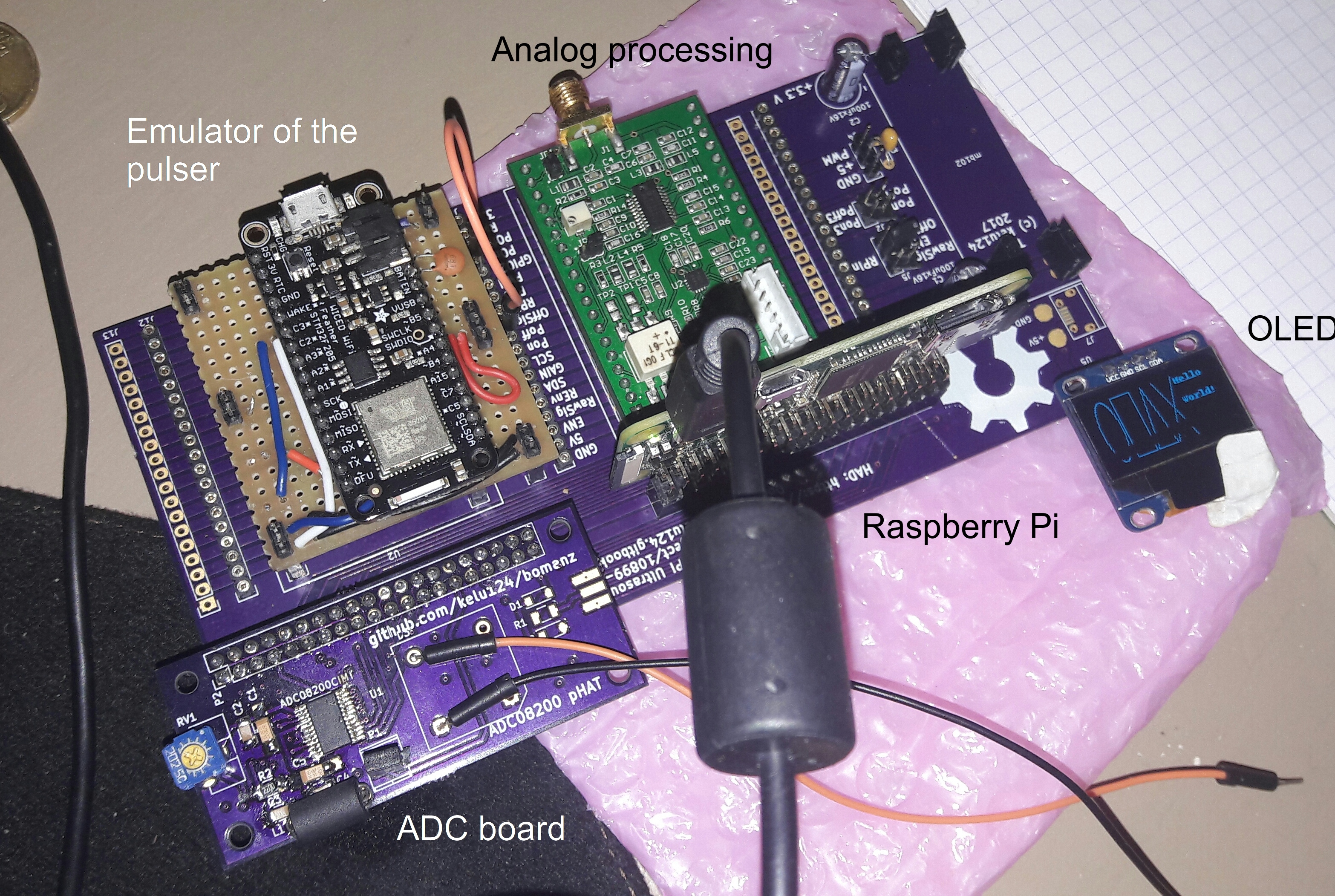 Quickstart of the APM module

The Analog Processing Board module

The assembly is detailed below: 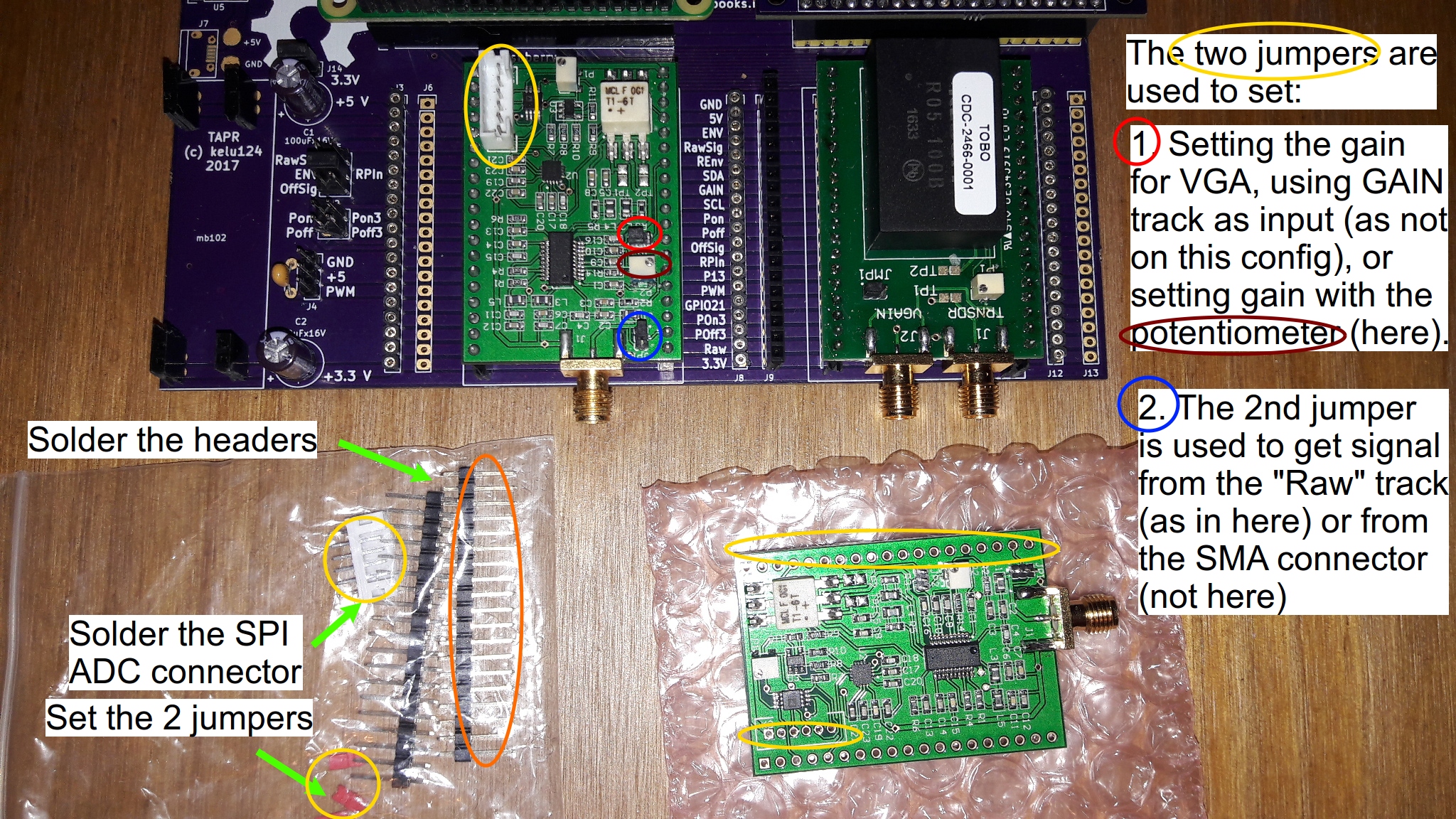 Read more on the dedicated page.

Apply a small voltage on Raw Track with jumpers rightly positioned (A). You should get a amplified signal on track RawSig (B), the offset enveloppe on REnv track (C), and envelopped of the signal on 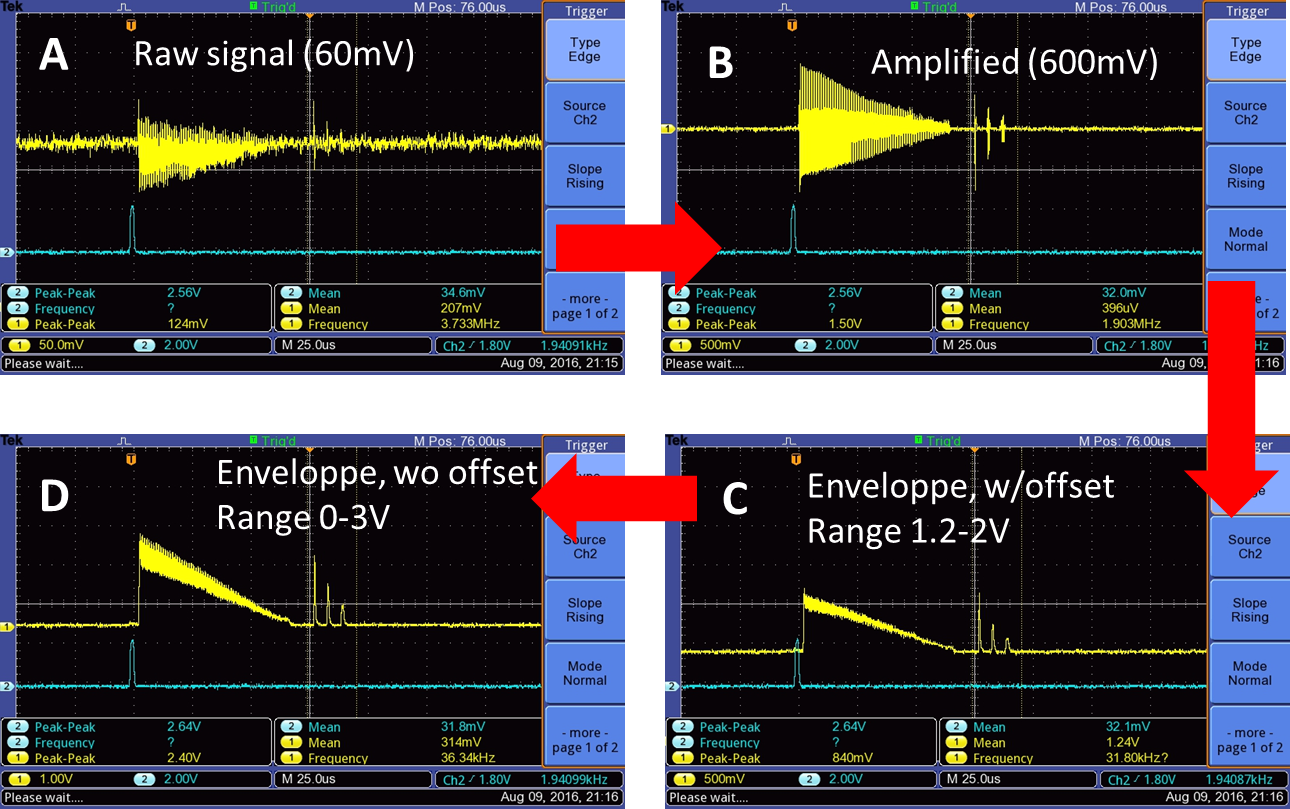 If not using a motherboard, connections are detailed below: 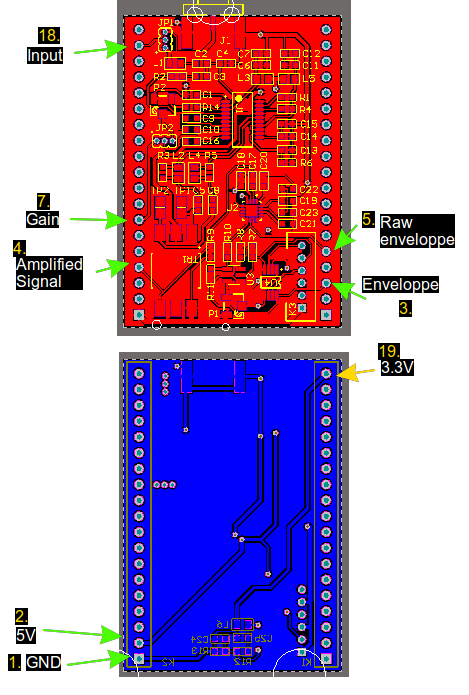 Quickstart of the ADC module 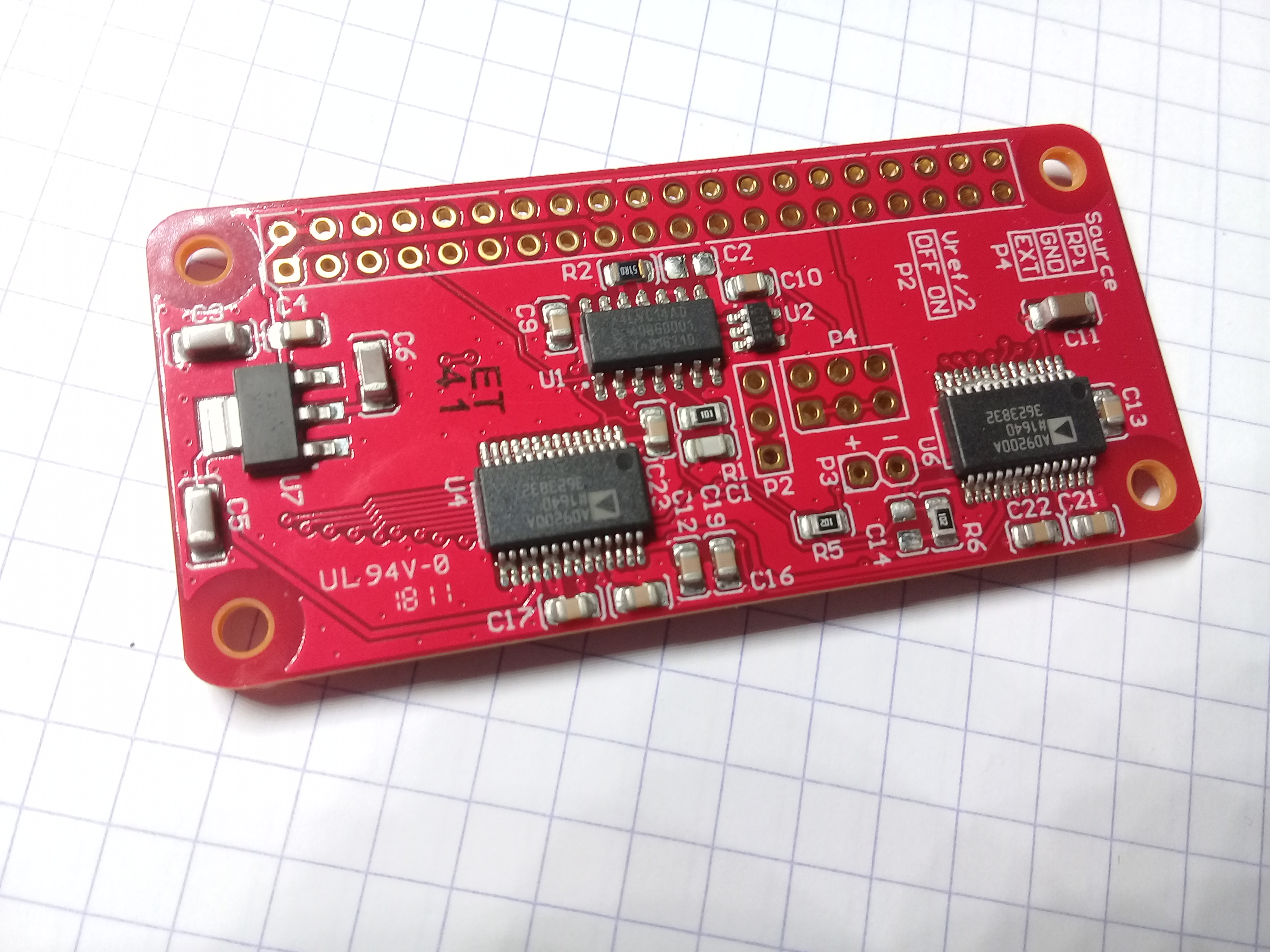 For the motherboard PCB based solution...

Just plug it into the board!

Beware of the headers! The idea is to have connections between the board and the pHAT. You can use any type of headers =) 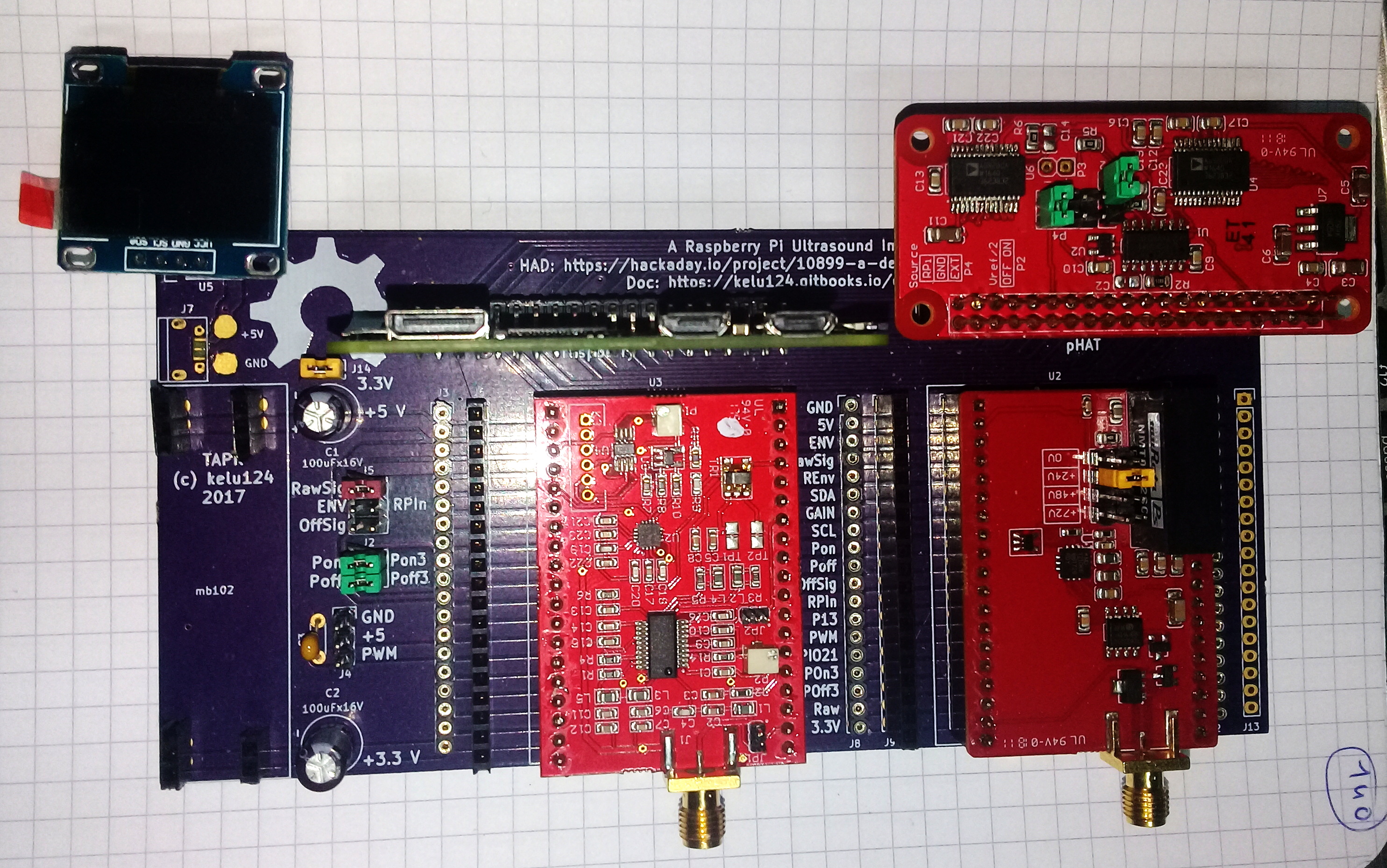 For a standalone version

You can use the standalone SD card image. Alternatively, you can setup the development environment as described below.

The standard module code is here and can be compiled using these steps.

The full procedures are described at on the raspberry doc page

Log now on this raspberry, and run the run.sh command to load the driver of the ADC. You'll see that the module appears as a /dev/hsdk device.

Capture occurs with a

Then copy the newly created file on your PC or where you need it. It dumps the raw GPIOs signals as described here

Beware! If you want to get a signal between [-1.5V and 1.5V], consider using a in series with input to remove all DC bias, and make sure the jumper are set as in the images above.